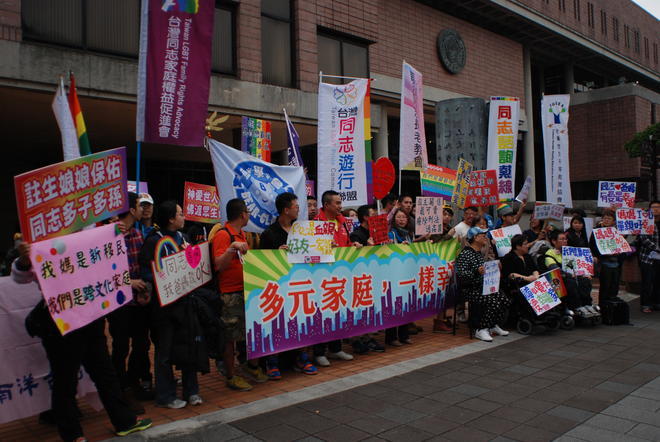 As a response to the campaign „Happy Family, Fun Walk,“ which took place on the “Freedom Square (C.K.S. Memorial Hall)” in Taipei on March 16th, Taiwan Tonzhi Hotline, along with other civil organizations and individuals supporting diverse forms of families gathered together in front of the National Central Library across from the street this same afternoon and shouted out the slogan “Different Families, the Same Happiness,” calling for the awareness and recognition of the existence and well-being of diverse families.

„Happy Family, Fun Walk“ took places today in a total of 11 cities and counties across the country, with flyers and banners stating that only “one man and one women, one husband and one wife, and for one lifetime” can constitute a happy family. In some areas, even ideas like “women’ subordination” and “abstinence” were promoted in the slogans. Moreover, some authorities have recruited middle and high school students to participate in the walk by granting them school credits in community services. Such themes not only betray the years-long effort Taiwan Government has put into gender mainstreaming, but also fail to acknowledge the happiness of families of different types that have long existed in the society. 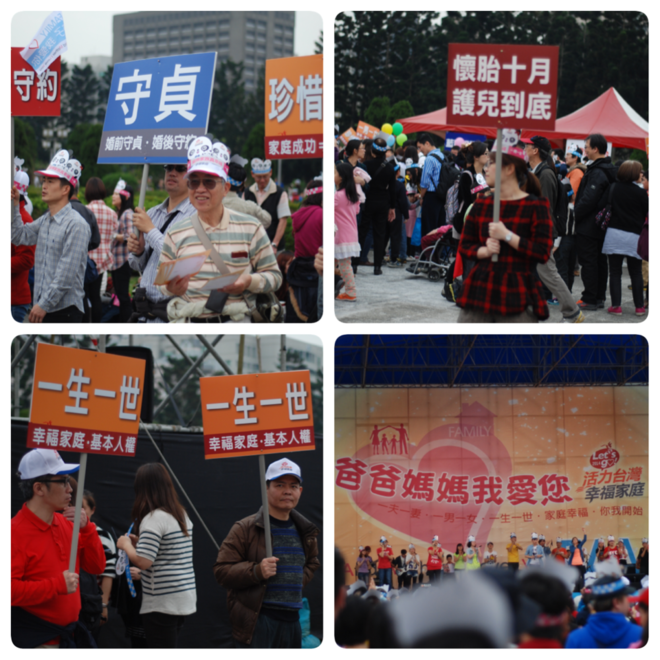 The campaign „Happy Family, Fun Walk” originates from the International Day of Families proclaimed by the United Nations in 1993. As pointed out by UN, the purpose of such a day is to focus on families’ functions and challenges, such  as advancing social integration and intergenerational solidarity (2013), ensuring work family balance (2012), confronting family poverty and social exclusion (2011), and HIV/AIDS and family well-being (2005). These themes have examined issues families face under the influence of globalization and social changes, led the public to reflect how families can adapt to different environments and how states and societies can help minority families in different forms become integrated and eliminate the mainstream society’s misunderstanding and discrimination towards them.

On a wheelchair, Vincent explained how the state’s refusal to legalize gay marriage robs his 15 year-long partner’s right to legally care for him and urged the government to pass the marriage equality bill. Marley from Taiwan Gender Equity Education Association shared how children raised in non-traditional families learn to internalize the dominating mainstream value of “happy families” and to deny their own realities, for fear of being bullied and discriminated. Education focusing on equality, respect and an open attitude is the only key to children’s health and development. Representatives from TransAsia Sisters Associations pointed out that Taiwanese society’s misunderstanding of and discrimination against cross-cultural families severely affect children growing up in such families, as some of them are often called names like “the retarded,” and they emphasized the importance of law changes and multi-cultural education in cultivating people’s respect for one another. Xiaobao told his story of how he had never felt different for being raised by his loving and caring grandmother and aunt until others made fun of his “abnormal” family.

Representatives from Awakening Foundation said that families are built by members who love, support and care for each other rather than blood relations. The owner of the famous “Hans Sauna” shared how he hosts New Year’s Eve dinner each year for LGBT friends who are not able to return home, and to these individuals who are away from their biological families, a place where they can spend holidays with people who truly accept their own identity is the definition of family.  The representative from Taiwan Association for Human Rights said, although being heterosexual, he believes that the warmth and tolerance are the most needed elements for a family. He also urged more heterosexual individuals to speak up and show their support for families of different kinds. 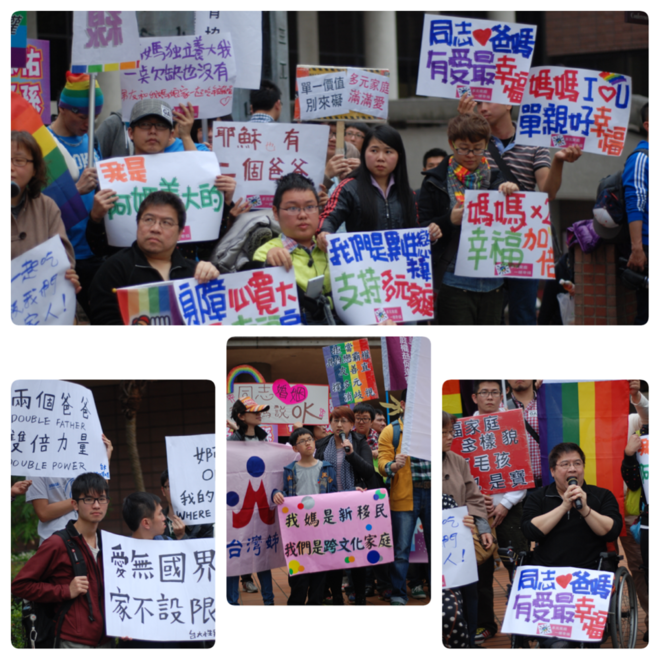 Sun from Taiwan LGBT Family Rights Advocacy pointed out that, more and more same-sex partners in Taiwan have children, but due to the restriction of the laws, the non-birth mother or father are not able to execute their full rights as parents.  He believes that family should not be limited to a combination of a women and a man, but of love and care.  As an owner of two dogs, the “Lieutenant” told the story how the relationship between his dogs and him has become the definition of a loving family to him. Finally,  Taiwan Disabled Rights Advocacy shard that, because of discrimination and difficulties in meeting new friends, it is often very difficult  for disabled individuals, regardless of their sexual orientation, to enter marriage. Therefore, friends often choose to form families in order to support and care for each other.

Families are never limited to the combination of a husband and a wife, and worshiping the value of such combination excludes and oppresses the reality of alternative families. The true purpose of the International Day for Families is to discover diversities and to respond to the needs of different communities. However, Taiwan government has allowed religious and conservative groups to kidnap this occasion and to turn it into an oppression of families in different forms, completely betraying the real meaning of the day.

The key factor determining if an individual can be nurtured by his/her family is not the format of the family but whether or not family members can support and love each other, and whether or not the state has provided these alternative families sufficient resources and protection.

Each family is different, and happiness has also various sources. Taiwan Tonzhi Hotline wishes to emphasize that the effort of every family to pursuit happiness is the same, and urges the society and the state to acknowledge the existence of alternative families, to recognize their contribution to social cohesion and to protect every family’s well-being via policies and social infrastructure.