For May 17th, which is the International Day against Homophobia and Transphobia (IDAHO), several LGBT organizations have launched the compaign „360 Occupations, LGBT Everywhere, Fight against Homophobia on May 17th “, calling for a collective “coming out” of LGBT individuals of different occupations to demonstrate to the Taiwanese society that LGBTs are everywhere, with different identities and different occupations. We believe that encouraging the society to see and to learn about LGBT communities is the first and the most critical step to create a gender-friendly environment without stereotypes and discrimination.

A “Collective Coming-Out” on IDAHO
On May 17th, 1990, World Health Organization (WHO) decided to remove “homosexuality” from mental illnesses. To memorize this important day and to raise the public’s awareness of discrimination and violence imposed on LGBT communities as well as of stigmatizing and exclusive social policies and legal regulations, international LGBT rights advocates therefore urged worldwide governments to name May 17th the “International Day against Homophobia and Transphobia.” Each year, LGBT organizations and communities around the world launch different anti-homophobia activities and campaign on this day.

This year, LGBT organizations in Taiwan choose “collectively coming-out” as our strategies to fight against homophobia and transphobia, for that we realize the mainstream society’s ignorance of LGBT communities and its negligence of their situations are the root of homophobia and transphobia and the major obstacle of LGBT rights movement. It is important for LGBT individuals to “come out”, as the mainstream culture often assumes that everyone is (or should be) heterosexual, and this assumption further reinforces the heterosexual-oriented worldview and a homophobic culture. Meanwhile, the homophobic culture and the related stigmas lead LGBT individuals to actively or passively become “invisible.” Resulting from such a vicious circle are the general public’s lack of knowledge about and contact with LGBT individuals, stereotypes and misunderstandings that are difficult to be changed, and difficulties in recruiting support for the LGBT rights movement. Therefore, collectively “coming out” will allow the mainstream society to recognize LGBT communities and greatly contribute to the “anti-homophobia” movement. 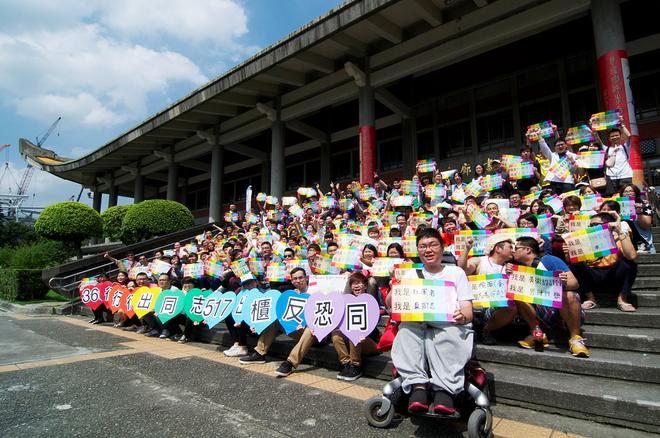 Confronting Homophobia and Transphobia
In recent years, the LGBT rights movement in Taiwan has faced huge obstacles and backlashes. Conservative religious groups have taken various measures to oppress LGBT-related gender education and the marriage equality bill, forcing LGBT individuals to return to their closets. Instead of defending the basic human rights of LGBT individuals with concrete actions, Taiwanese authorities have given up their stance. For example, the draft amendments to the civil code, which incorporate marriage equality, civil partnership and multi-person household and have collected more than 150 thousand signatures for the petition, were blocked in the legislature. Furthermore, for the new assembly of the Gender-quality Council, the Ministry of Education even nominated Professor Tseng Ping-Jie and Professor Ting Hsueh-Yin, both of whom have been known for their discriminating speech against LGBT communities.

In discussions between LGBT rights advocates and conservative religious representatives, government officials, congress members and politicians, it has often been mentioned that “LGBT individuals are only a small part of the society.” This suggests that, to the authorities, LGBTs are only a set of statistical numbers without a face and a body. For the general public, when hearing about all stigmas and misunderstandings about LGBT communities, it is also difficult for them to learn about their actual situations and thus to support their human rights if they do not know any LGBT individuals in their lives.

According to a study conducted by the Pew Research Center in 2013, 14% of the Americans have turned to support marriage equality in the past 10 years, 30% of which stated that such change resulted from their family members, friends or acquaintances being gay. We have learned from such studies as well as actual life experiences that, getting to know LGBT individuals and learning about their life stories play an important role in helping the general public understand their situations, eliminate stereotypes and become supportive of LGBT rights and marriage equality. 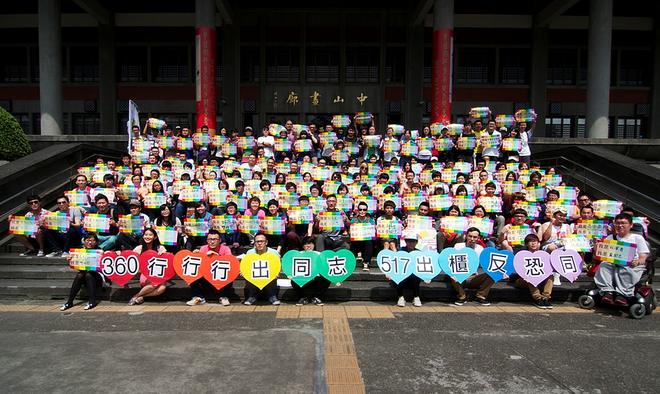 A Fight against Homophobia by LGBTs of All Occupations
Therefore, LGBT groups have organized this campaign since the beginning of May and within two weeks 250 LGBT friends have joined us. We’ve seen that although often neglected by the society, LGBTs are in fact at every corner of the society and of every occupation, including restaurant owners, drivers, teachers, lawyers, doctors, social workers, language therapists, priests, engineers, aircraft mechanics, accountants, chefs, hair designers, photographers, architects, designers, students, life guards, sale persons, business representatives, security personnel, journalists, voice actors/actresses, advertising executives, and politicians. On May 17th, these 250 participants would participate in the public photo-shooting event of “Come out to fight against homophobia.” We hope to show the Taiwanese society that individuals with different gender identities and sexual orientations do exist: they live, work, and contribute to the society. We expect that by seeing, getting to know and learning about LGBT communities, the society can make its first step of fighting against homophobia and transphobia. In the meantime, we urge the government to acknowledge the basic human rights of LGBT communities and to take on its responsibilities to assure LGBT individuals equal rights and protections, turning Taiwan into a gender-friendly country.