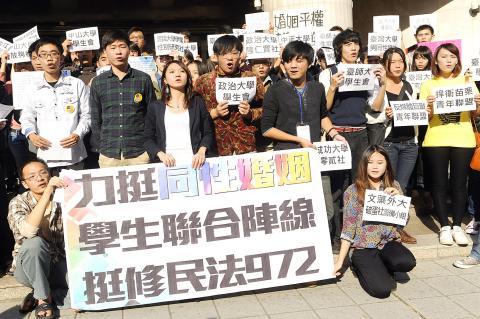 Members of university student associations and other student groups hold up a banner in front of the Legislative Yuan in Taipei yesterday, announcing the launch of an alliance to support revising Article 972 of the Civil Code to legalize same-sex marriage.Dec 03, 2013

Dozens of university student associations and student organizations across the country yesterday announced the establishment of an alliance to support the legalization of same-sex marriage, saying that the time is ripe for such a change to eliminate discrimination based on sexual orientation.

Citing the results of several public opinion polls conducted by various institutions in the past year, student representatives said at a press conference in front of the Legislative Yuan in Taipei that more than half of the respondents supported revising Article 972 of the Civil Code and legalizing same-sex marriage.

“A lack of a consensus on the issue is just the government’s excuse,” Hong added.

People with different sexual orientations should be treated the same way by the law and enjoy the same rights, the alliance said.

The alliance in particular called on religious groups, the primary players in recent protests against the amendment, to stop their smear campaign against gays and lesbians, and same-sex marriage.

The false accusations have misled the public about same-sex marriage, the alliance argued, adding that the legalization of same-sex marriage would not infringe upon the interests and rights of heterosexual families.

The alliance emphasized that it supports constructive and rational dialogue between all interested parties, rather than citing tradition and smearing homosexuals as reasons to oppose the amendment.

The alliance said it plans to promote awareness on campuses at universities nationwide, while urging young people to step forward and fight for the values they believe in.