The First Review of LGBTI Human Rights Policies in Taiwan

Taiwan Tongzhi (LGBTQ+) Hotline Association published the 2017 Taiwan LGBTI Rights Policy Review, and in it we examined 14 aspects and 27 issues concerning the LGBTI rights policies in Taiwan. We found that for some LGBTI issues there lacks legal protection, some lacks statistics and research, some lacks a well thought-out execution plan despite having policies in place, and some are compromised by unfriendly law enforcement personnel and the interference by anti-LGBTI and anti-sex groups. All the aforementioned obstacles are preventing LGBTI individuals to be fully protected by law. We proposed four improvement plans accordingly:

Calling for a comprehensive review of LGBTI rights policies in Taiwan

Although same-sex marriage has received a significant amount of attention in both the public and the political realm in recent years, there still is not a comprehensive review of LGBTI rights policies in Taiwan. In the past, there have been human rights reports that touched on LGBTI issues, such as shadow reports of international human rights covenants (such as ICCPR, ICESCR, and CEDAW) done by various NGO groups, and human rights reports done by the Amnesty International and Taiwan Association for Human Rights. However, LGBTI issues usually took a meager part of the report. Furthermore, useful study results are scattered and in academic theses and reports, such as LGBTI education in gender equity education and same-sex partner intimate violence issue in domestic violence prevention law, but there have yet to be systematic plans to use such results to create empirically sound policies. Other aspects of the LGBTI issues, such as how The Protection of Children and Youths Welfare and Rights Act and media rating system impact the youth, though deemed important by practitioners in the field, have also not been supported by empirical data to transform into sensible policies.

As a result, Hotline devoted an entire year to creating a comprehensive review of LGBTI rights policies in Taiwan by collecting and analyzing literature, interviewing scholars, experts, and NGO/NPO workers, and holding focus-group discussions. The report “2017 Taiwan LGBTI Rights Policy Review” has been officially published at the beginning of 2018 (see attachment 1). This report reviewed policies covering 14 aspects and 27 issues concerning the LGBTI rights that have grave importance for LGBTI individuals’ lives and welfare. We have also proposed to the government concrete suggestions for improving LGBTI rights policies.

LGBTI Rights: It is Everywhere

During the process of review, Hotline also found an unbalanced investment of resource in HIV/AIDS study in the public health realm, leaving out many other important LGBTI issues. Also, since research of LGBTI issues in Taiwan is still in its infancy, most of the research is done qualitatively and the results cannot be generalized to a wider population to fathom the prevalence of LGBTI rights infringement in their everyday life. It can also be seen from the review report that many LGBTI rights still are not protected by law, such as same-sex couple legal recognition, parental rights, and adoption.

Representative statistics are lacking for many LGBTI rights issues, such as hate crime rate in each region, the physical and mental health survey of the LGBTI individuals, and the effect of sexual orientation and gender identification on receiving and providing long-term care. For some issues, despite having policies in place, the actual protection is compromised by various factors such as the flaws in the policy design (such as the ban on blood donation by men who have sex with men and the punishment for HIV+ person who engaged in unprotected sex), the law enforcement personnel’s low awareness of LGBTI issues, the interference of the anti-LGBTI and anti-sex groups on the implantation of sex education, the power gap between employers and employees in case of work discrimination, and the difficulty in evidence collecting when LGBTI rights were violated.

On top of that, the rigid traditional gender role stereotypes are still prevalent  in the society, which lay the foundation of infrastructure that only serves the gender-binary, excluding many LGBTI individual such as transgender and intersex individuals. The flaws in policies subject LGBTI individuals in Taiwan to various difficulties every day from dawn to dark. Such flaws also pressurize the LGBTI individual to dedicate more time, energy, and money to simply survive on this land.

According to Yibee Huang, the CEO of Covenants Watch, five out of the nine core international human rights instruments have been adopted into international laws since 2009. The protection of the LGBTI rights are clearly stated in the instruments and have been important weapons of the LGBTI rights activist. However, in Taiwan, the anti-LGBTI groups, under the disguise of parents groups, gender human rights, public health professional group, and women’s rights group, are interpreting the international human rights covenants out of context to serve their own anti-LGBTI agendas. Conservative government offices, such as the Ministry of Education, are siding with the anti-LGBTI groups to hurt the LGBTI rights.  And yet, the reviewers of two covenants and CEDAW have all concluded that Taiwan’s government needs to improve LGBTI rights protection.

Furthermore, according to Wang Tsen-Yung, professor of the Graduate Institute of Social Work in Cheng-Chi University, ever since Taiwan’s martial law was lifted in 1987, comprehensive reviews of elderly rights and of the disability rights were published as early as 1994, and after a long-waited 23 years, there is finally a comprehensive review of the LGBTI rights. He though the review heralds a future of equal human rights in Taiwan. The review also affirms the power of the people in overseeing the Government in their policy making and execution. He believed that the supervision from the civic sectors and the endeavor from the government would facilitate the progress of a more just society. However, it is also obvious during the fight to legalize same-sex marriage that stigma is still hovering over the LGBTI community, and this community remains invisible to many and excluded from protection. Professor Wang also shared a story of a same-sex marriage activist from Australia, who realized in the process of fighting for same-sex marriage legalization that there are no other citizens that have to so tirelessly and constantly prove themselves to be deserving of equal rights. Taiwan seems to have given up the faster and less damaging path after the supreme court ruled that the ban on same-sex marriage is unconstitutional. Wang cautioned that we should not be complacent simply because of the victory on same-sex marriage, since marriage is still an institution that is founded on binary, leaving out diversity. The most important thing is to be able to live a life free of fears.

During the press conference we held for the publication of review in Januarary 2018, Legislator Yu thanked Hotline for its dedication to making this review possible. She argued that people seemed to think LGBTI rights are now well protected since the Constitutional Court of Taiwan issued Interpretation No. 748 (declaring the ban on same-sex marriage is unconstitutional). The reality, however, is that LGBTI individuals are facing a magnitude of discrimination and unequal treatments each day. The Legislative Yuan has implemented a Gender Equality Committee to review the 27 issues in this comprehensive report. Yu called for more government investment in improving LGBTI rights after same-sex marriage right.

Make “LGBTI-friendly” More a Policy and Less a Slogan

At the press conference, Zhao Hui-Wen from the Executive Yuan’s Gender Equality Committee stated that Executive Yuan plans to implement 16 policies to ensure gender equity in all sectors of government. She also promised to continue working on protecting equal rights with NGOs after her realization of how insufficient the protection is while reading the review report thoroughly. In order to increase the public understanding of the gender diversity, the Executive Yuan is going to hold photography exhibitions about gender diversity in various cities across Taiwan. The Executive Yuan endeavors to make Taiwan the most LGBTI-friendly country in Asia and to allow LGBTI citizens to live peacefully on this land.

The four suggestions that Hotline made to the government are as follow:

Hotline hopes Taiwan’s government would not only make Taiwan the first country to legalize same-sex marriage in Asia, but also a country that truly devotes to protecting equal rights for all. 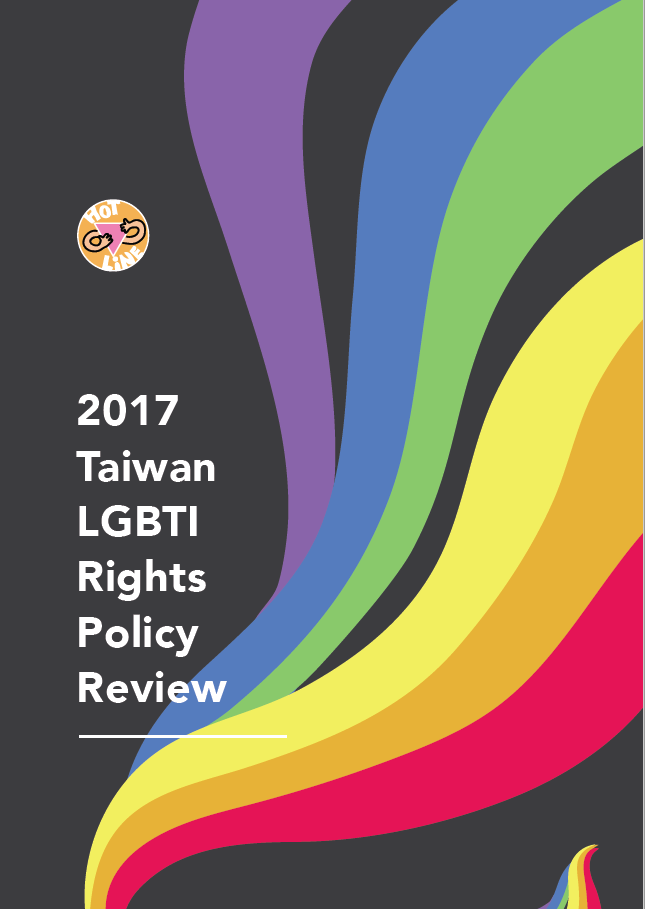